Colonial Australia: Notes and Sketches of New South Wales 1839 to 1844 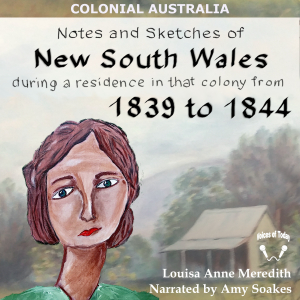 A fascinating insight into colonial Australia, this intriguing first-person historical account describes the 1839 voyage of a free woman from England to Australia, and her impressions of Sydney and surrounds during the first years of her residence in the pioneering British colony.
10USD
GET ACCESS
Share:

A fascinating insight into colonial Australia, this intriguing first-person historical account describes the 1839 voyage of a free woman from England to Australia, and her impressions of Sydney and surrounds during the first years of her residence in the pioneering British colony.
GET ACCESS

In the summer of 1839, 26-year-old Louisa Anne Meredith, in the company of her husband, Charles Meredith, sailed from England to the British colony of New South Wales, in what was then New Holland.

Four years later, she published a detailed account of the years since she had left England. A fascinating window into the past, Louisa's impressions and experiences cover the four-month ocean voyage; life within the fledgling city of Sydney; travels across the Blue Mountains to Bathurst; and eventual settlement at Homebush in Sydney's west. Vivid observations of Sydney as it was in the 1840s combine with descriptions of flora, fauna, and the general way of life in the colony, all told through the eyes of a well-educated, articulate, and well-to-do woman who had come from a very different climate and upbringing to that she found in Australia.

Louisa was a naturalist, author, and illustrator and her eye for detail provides a historically significant document giving a unique window into early Australian settlement. From descriptions of polite society, to hardships of drought and overland travel; from architecture to politics, convicts to aboriginal customs, Louisa's keen wit and clever insight provide a fascinating account of life in colonial Australia.