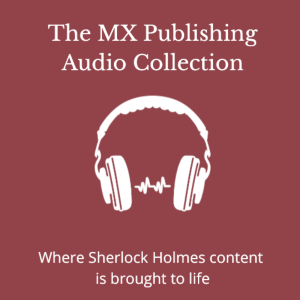 The audio collection aims to bring together fasciinating author interviews, theatre performances and Sherlock Holmes fiction and non-fiction, and deduction tips from experts like Ben Cardall, with new content being added every month.

We launched with a bang with a brand new and exclusive interview 'Reacher and Sherlock' with NY Times bestselling author Lee Child where we discuss the links between Holmes and Reacher and the new series 'Reacher' which came to Amazon in February.

This collection includes selected short stories from the MX Book of New Sherlock Holmes Stories which has dozens of volumes and hundreds of stories and we'll be adding new stories every month too.

We will also add full length audiobooks where we can and are delighted to add 'Sherlock Cat and The Missing Mousie' as our first children's book into the collection.

Reacher And Sherlock with Lee Child

The King of Bohemia with Otto Penzler

The Criminal Mastermind of Baker Street with Rob Nunn

A Case of Identify - with Jonathan Goodwin

The Adventure of The Aspen Papers - Daniel Victor

The Adventure of The Fateful Malady - Craig Janacek

The Adventure of The Christmas Stocking - Paul D Gilbert

The Adventure of The Missing Necklace - Daniel Victor

Larceny In The Sky With Diamonds - Robert V Stapleton

The Adventure of The Empty Manger - Tracy Revels

The Adventure of The Long Lost Enemy - Marcia Wilson

The Adventure of The Regular Passenger - Paul D Gilbert

Sherlock Holmes and The Strange Death of Brigadier-General Delves (Novel)

Holmes In Time For Christmas (Novella)

MX Publishing is a social enterprise and percentage of the proceeds from this app will be donated to Undershaw, a school for children with learning disabilities. Undershaw was Sir Arthur Conan Doyle's former home where he wrote many of the Sherlock Holmes stories. A great thanks to the authors from the MX Book of New Sherlock Holmes Stories for donating their stories to the app and the series editor David Marcum who has edited over 800 stories for the collection so far and came up with the idea for the series.