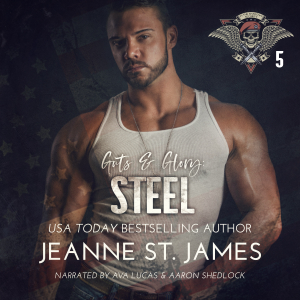 Strength is what we gain from the madness we survive.

For Anson “Steel” Sterling, former Marine Raider and current bad boy of the Shadows crew, kicking ass and talking sh*t is all in a day’s work. His boxing skills make him lethal in and out of the ring and his mind is just as quick as his fists. When an assignment has him heading out to Nevada, he’s prepared for boredom. After all, how hard can protecting one female athlete from a stalker be?

Katheryn “Kat” Callahan has one goal, prove to everyone, especially her judgmental father, she can be the best female MMA fighter. She’s more than capable of defending herself and doesn’t need a hulked-out alpha-hole bodyguard with a sharp tongue and a surly attitude shadowing her every move. With the biggest match of her career right around the corner, one crazy stalker’s not going to bring her down.

The pint-sized fighter fascinates Steel. With her striking amber eyes and honed physique, the attraction is immediate, but it’s her grit and determination that really gets his blood pumping. He’s ready to go a few rounds if it means seeing her worked up. But Kat needs to remain focused on her goals and Steel isn’t making that easy.

Can their mutual passion and stubborn attitudes make them the perfect team? Or will they remain in opposite corners, forever fighting alone?

Note: Steel is the fifth book of the Guts & Glory series, a six-book spin-off from my Dirty Angels MC series. While it’s recommended to read both series in order, each book can be read as a stand-alone. As with all my books, this has an HEA, no cliffhanger or cheating.