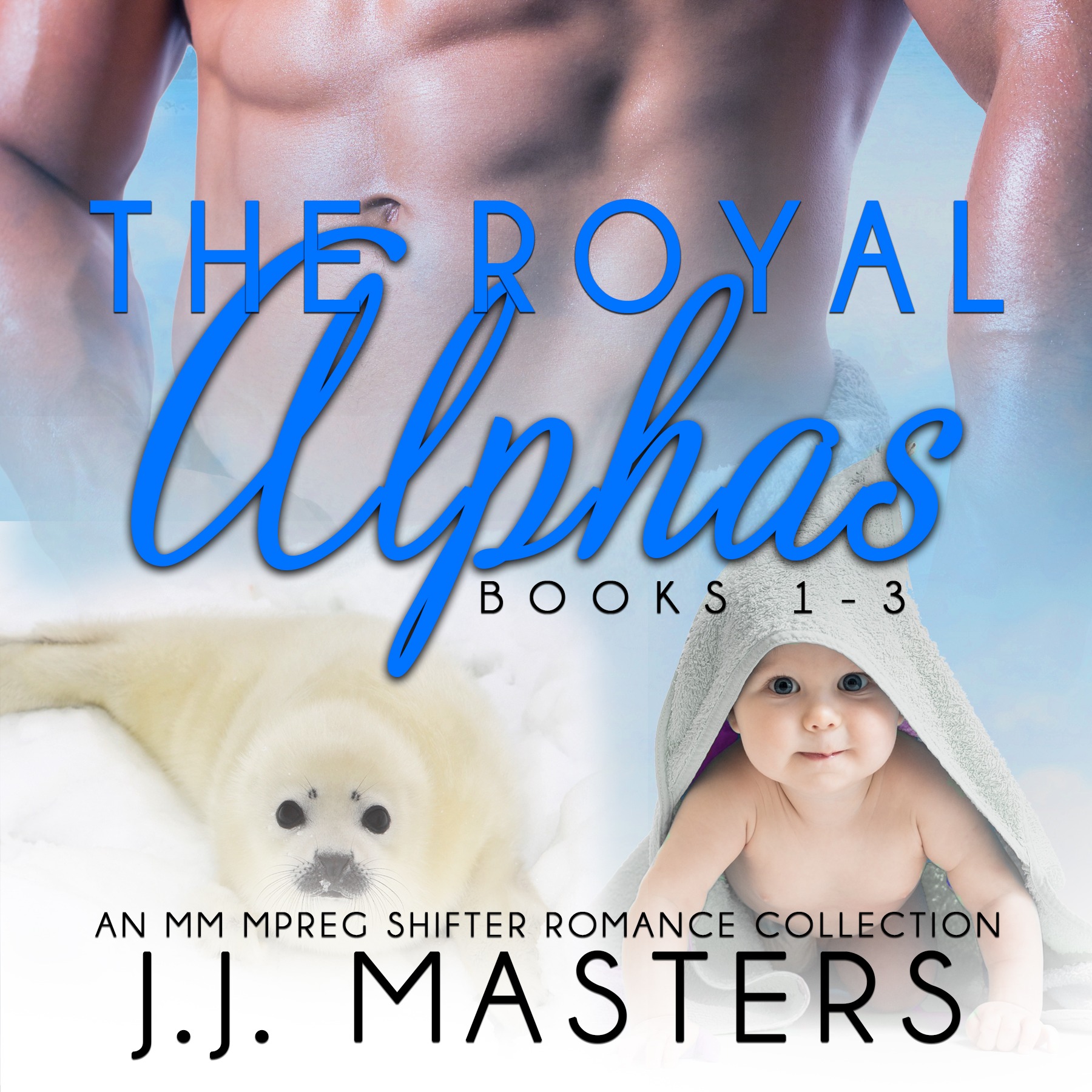 Includes all 5 books of The Royal Alphas Series by Jeanne St. James writing as J.J. Masters. Narrated by John Solo
GET ACCESS

A Selkie prince forced to produce an heir. An omega destined to become a royal’s fated mate...

Prince Kai’s life as he knows it is now over. As the firstborn alpha to the Selkie King of the North, he’s required to produce an heir. Whether he wants to or not. When the Selkie Seekers finally present his fated mate, he dreads being tied to this stranger for the rest of his life. He can only hope his omega will be easy on the eyes and somewhat intelligent.

Raised in a family of good breeding, Luca always knew it was possible he’d end up the mate for an alpha of nobility. Only to whom, he never knew. Every time the Seekers summoned him for the humiliating presentation ceremony to royalty of all levels, he feared being stuck with some unbearable, abusive or very unattractive alpha. As an omega he doesn’t have the choice to say no. Not only is it his obligation, it’s the law. If he refuses, he and his family would become outcasts and banished from the Selkie community.

However, as soon as Kai enters the Great Hall of the North, it’s clear that the handsome prince is his alpha. Luca’s pleased with the choice the fates made until the king demands that not only he become pregnant within six months but produce an alpha pup with his son, otherwise he’ll be cast aside. And getting pregnant might be a problem...

An alpha prince ready to find his fated mate. A Selkie who wishes he wasn’t omega-born...

Unlike his brothers, Prince Adrian, the dutiful second-born son to the King of the North, looks forward to finding his true mate and producing an heir. Until he stumbles across a beta guard with an enticing scent.

Del never wanted to be an omega. All his life, he’s only wanted one thing: to serve as a Royal Guard. Though forbidden, he found a concoction to mask his omega scent and was successful until his dwindling supply caused the alpha prince to discover his deception.

Rian not only breaks every cherished royal tradition, but ends up hiding Del until he can figure out the reason for the attraction between them. However, one selfish mistake puts them in a precarious position they can’t escape. Their reckless actions have them worried they’ll be banished from the Selkie community. Rian needs a plan to convince his father to accept his mate before he has to risk everything he’s ever known and loved for their future. Because, no matter what the king says, Rian will not give up Del.

An alpha claim. A possible heir. A Selkie prince whose mistake might just be what the fates intended.

Zale, the third alpha-born son of King Solomon, is concerned. His youngest brother, Caol, has been spending time with an unbonded omega. Being a responsible alpha, Zale feels it’s his duty to warn the omega Finn before he and Caol get into trouble. Especially since Finn had only been brought to the colony by their father in case his oldest brother’s fated mate couldn’t conceive. However, when Zale goes to Finn’s quarters to have a word with him, he isn’t expecting to discover what he does: the omega in the throes of oestrus and begging for an alpha’s assistance.

Finn has nowhere else to go. Not only unwanted by his own family, his previous alpha perished in a tragic accident. So for the past two years, the omega has relied on the King of the North’s generosity, even if it means he may end up as a surrogate for one of the alpha-born princes. Or even worse, the king’s sixth mate. But when the Prince Zale comes upon him during his heat, Finn demands relief from the alpha. Although afterward, has to live with the guilt. Now, he might not only be carrying the prince’s son, he may have very well ruined Zale’s chance to find his true fated mate...

Secrets, lies and a forbidden bond that could change the fate of a kingdom.

Marlin, Selkie prince and fourth alpha-born son of the King of the North, desires someone he shouldn’t. While taking a human lover is not quite forbidden, the one who caught his eye happens to be his brother’s scorned former lover. Nevertheless, every time Marlin’s around the man, he finds Nic hard to resist, even though his attitude can be frustrating. However, Marlin likes a challenge, and Nic’s a challenge he’s willing to tackle.

Nic has been bitter ever since the firstborn prince, Kai, broke off their affair abruptly years ago. To become involved with Kai’s younger brother could be just as heartbreaking because Marlin, like Kai, is obligated to find his fated mate and produce heirs. Something Nic can’t do. However, neither can fight their mutual attraction.

When a traitor escapes, Marlin’s skin is stolen, and danger ensues, it’s Nic who becomes the prince’s hero. And it’s at that very moment that Marlin can’t deny their fate, whether it’s forbidden or not.

An alpha prince, required to find his fated mate, has already pledged his love to another. But there’s a problem...

Prince Caol of the North has enjoyed a very active, carefree life. Being the youngest of five alpha-born princes, he hasn’t had a lot of responsibilities. As he watched his brothers find their fated mates and produce sons, he knew the time would come when he’d be forced to do the same. However, he’s in no rush since he’s quite happy with his current lover. While Caol wants to take his beta servant as his mate, the king demands the law be upheld and he find an omega who can give him sons to continue the Selkie race.

Beck can’t bear the thought of losing his alpha—the prince he not only served for years but loved just as many—to an omega. A male fated to bear his alpha sons. However, Beck’s gender makes it impossible for the prince to take him as his mate since betas cannot produce heirs.

Galen has lost so much. Trying to mend his broken heart, the omega’s thrown into the path of his alpha when he becomes a wet-nurse to the prince’s son. A son Caol has no idea even existed. The only problem is his alpha already has a lover. One Caol’s been with for years, one he loves. Just when Galen thought he’d never find a mate due to his past circumstances, the omega unexpectedly finds two. Was this what the fates intended?

Note: This collection includes m/m shifter mpreg stories. Due to the “knotty” times in these books, they’re recommended for mature readers only. While they can be read as standalones, it’s recommended to read the series in order. And, like all of my books, each has an HEA.