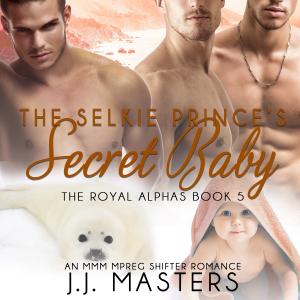 An alpha prince, required to find his fated mate, has already pledged his love to another. But there’s a problem...

Prince Caol of the North has enjoyed a very active, carefree life. Being the youngest of five alpha-born princes, he hasn’t had a lot of responsibilities. As he watched his brothers find their fated mates and produce sons, he knew the time would come when he’d be forced to do the same. However, he’s in no rush since he’s quite happy with his current lover. While Caol wants to take his beta servant as his mate, the king demands the law be upheld and he find an omega who can give him sons to continue the Selkie race.

Beck can’t bear the thought of losing his alpha—the prince he not only served for years but loved just as many—to an omega. A male fated to bear his alpha sons. However, Beck’s gender makes it impossible for the prince to take him as his mate since betas cannot produce heirs.

Galen has lost so much. Trying to mend his broken heart, the omega’s thrown into the path of his alpha when he becomes a wet-nurse to the prince’s son. A son Caol has no idea even existed. The only problem is his alpha already has a lover. One Caol’s been with for years, one he loves. Just when Galen thought he’d never find a mate due to his past circumstances, the omega unexpectedly finds two. Was this what the fates intended?

Note: A 66k-plus word m/m/m ménage shifter mpreg story, this is the fifth book in the Royal Alpha series. Due to the “knotty” times in this book, it is recommended for mature readers only. While it can be read as a standalone, it’s recommended to read the series in order. And, like all of my books, it has an HEA.