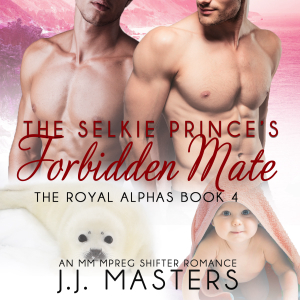 Secrets, lies and a forbidden bond that could change the fate of a kingdom.

Marlin, Selkie prince and fourth alpha-born son of the King of the North, desires someone he shouldn’t. While taking a human lover is not quite forbidden, the one who caught his eye happens to be his brother’s scorned former lover. Nevertheless, every time Marlin’s around the man, he finds Nic hard to resist, even though his attitude can be frustrating. However, Marlin likes a challenge, and Nic’s a challenge he’s willing to tackle.

Nic has been bitter ever since the firstborn prince, Kai, broke off their affair abruptly years ago. To become involved with Kai’s younger brother could be just as heartbreaking because Marlin, like Kai, is obligated to find his fated mate and produce heirs. Something Nic can’t do. However, neither can fight their mutual attraction.

When a traitor escapes, Marlin’s skin is stolen, and danger ensues, it’s Nic who becomes the prince’s hero. And it’s at that very moment that Marlin can’t deny their fate, whether it’s forbidden or not.

Note: A 60k-plus word m/m shifter mpreg story, this is the fourth book in the Royal Alpha series. Due to the “knotty” times in this book, it is recommended for mature readers only. While it can be read as a standalone, it’s recommended to read the series in order. And, like all of my books, it has an HEA.