The Selkie Prince & His Omega Guard (The Royal Alphas, Book 2) 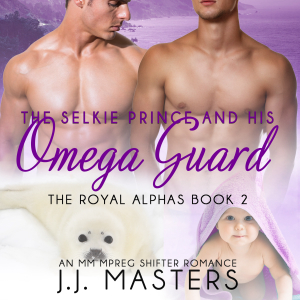 An alpha prince ready to find his fated mate. A Selkie who wishes he wasn’t omega-born...

Unlike his brothers, Prince Adrian, the dutiful second-born son to the King of the North, looks forward to finding his true mate and producing an heir. Until he stumbles across a beta guard with an enticing scent.

Del never wanted to be an omega. All his life, he’s only wanted one thing: to serve as a Royal Guard. Though forbidden, he found a concoction to mask his omega scent and was successful until his dwindling supply caused the alpha prince to discover his deception.

Rian not only breaks every cherished royal tradition, but ends up hiding Del until he can figure out the reason for the attraction between them. However, one selfish mistake puts them in a precarious position they can’t escape. Their reckless actions have them worried they’ll be banished from the Selkie community. Rian needs a plan to convince his father to accept his mate before he has to risk everything he’s ever known and loved for their future. Because, no matter what the king says, Rian will not give up Del.

Note: A 60k-plus word m/m shifter mpreg story, this is the second book in the Royal Alpha series. Due to the “knotty” times in this book, it is recommended for mature readers only. While it can be read as a standalone, it’s recommended to read the series in order. And, like all of my books, it has an HEA.

trip_origin
The complete audiobook of The Selkie Prince & His Omega Guard by J.J. Masters; Narrated by John Solo