Made Maleen: A Modern Twist on a Fairy Tale 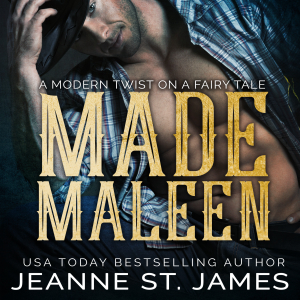 When Maleen King’s father catches her naked in the hay loft with her high school sweetheart, he sends the eighteen-year-old away to receive a college education and rise above the humble beginnings of a Kansas dairy farm. Now fourteen years later, Mal comes home to run the farm after the death of her father. The stress of a disastrous marriage and being a NYC stock broker made her long to return to a simple life.

Braydon Daniels, devastated when Mal’s father sent her thousands of miles away, has thought about her every day since. Now, over a decade later, he finds himself alone, divorced, and beaten down by the trauma of his broken marriage. When Mal comes back to town for her father’s funeral, he realizes the feelings he once had for her are just as strong. There’s one little snag, though. His ex-wife is the woman Mal has hated her whole life. And they have a child together.

Despite the struggle to recover from their past relationships, the undeniable attraction between them still exists. Can they rekindle the passion they once had?

NOTE: This is a 28k word second-chance love story loosely-based on the Grimm Fairy Tale Maid Maleen. No cliffhanger and has an HEA. Bray is a non-alpha, sweet country boy. So if you like alpha-holes, this novella is not for you!