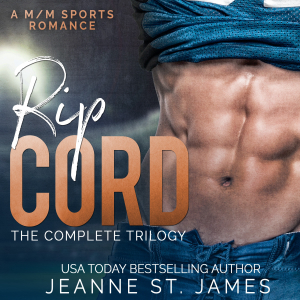 A contemporary gay romance written by Jeanne St. James and narrated by John Solo
GET ACCESS

Gil Davis hated high school. Ever the geek, he has no intentions of attending his 10th year class reunion. The last thing he wants is to relive the taunting and teasing he received during his teenage years. However, there is one thing he misses from high school: the star Varsity football player. The one he had a crush on from the first day he laid eyes on him. But the last thing he expects is the now pro football player to come back to their home town to attend a lame high school reunion. Known as the Bad Boy of the NFL, Ripley “Rip” Cord, not only shows up, but shows up without a date and an eye for Gil.

When Rip Cord is kicked out of the NFL, he shows up unexpectedly at Gil Davis’ front door. With his career over, Rip’s finally ready for a future with Gil, if Gil’s willing to give him another chance.

Note: This is the three Rip Cord novellas in one set. As with all my books, it does not have a cliffhanger and does have an HEA.