Marginal Eyes: A Mixed American's Struggle for Identity in a Nation of Black and White 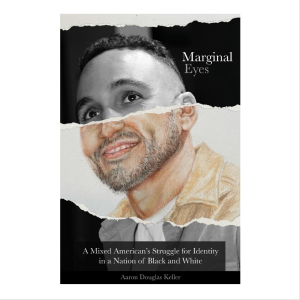 Join this personal journey through memoir, narrated by the author.
GET ACCESS

At the age of ten, Aaron’s childhood within a diverse community shifted abruptly when his family moved to small-town Indiana. There, racist mentalities stereotyped him for his Mixed features and heritage. Marginalized as a Black person within his new, overwhelmingly European-American community, he learned to hide parts of himself that were rejected, hoping to escape harsh racial prejudices.

Driven by fear down a road to build a “pure” identity beyond others’ criticism, desperate to relieve the shame he felt about his own humanity, Aaron pursued varied and often extreme paths in politics, religion, artistry, and education. The utter brokenness, great generosity, and inner voice he met along the way brought with them the truth that his perfectly imperfect humanity was all he ever needed.

AARON DOUGLAS KELLER recounts the struggles, adventures, and lessons of his journey to self-remembrance, acceptance, and celebration in this revealing, surprising, and inspiring memoir accompanied by insightful social commentary. Along with renewed happiness and freedom, he gained empathy for what so many of us grieve: inner clarity and peace we lost, when our nuanced humanity was covered by racism, religious ideology, nationalism, and other black-and-white mentalities. Aaron shares his story of trauma and addiction survival, as part of his escape from toxic US racial dynamics, along with insights he gained about safeguarding our humanity from inhuman forces in American culture.

This is the complete text of the memoir, narrated by the author.

Aaron Douglas Keller
Aaron Douglas Keller self-identifies as a Mixed American of the BIPOC (Black, Indigenous, and People of Color) community. He is also a musician, a ponderer of quirky things, a human freedom lover, and a former Vedic meditation and wisdom teacher. After varied endeavors in academics, business, artistry, spirituality, and other areas, he sees his most valuable contribution as the lasting treasures in his story. Born from great extremes between American privileges and oppressions, his life’s wisdom presents healthy understanding of what life is like for many US citizens. The lessons he takes from his past speak to both unique benefits and harmful failures of US ideals and culture and offer unique takes on how to facilitate a brighter future for all Americans. Along with written and visual content he creates on Mixed life, human community, and emotional well-being, which he strives to make accessible to all types and ages of people, Aaron enjoys opportunities for public speaking, podcast appearances, and other engagements with media on these same topics. His goal is to share messages from his memoir and experiences, showing up as a vulnerable participant with the honesty needed to inspire meaningful conversation, cultural change, and community building. There’s nothing more beautiful to him than just being human, and this conviction is what he hopes to share.
Get Access for USD 1000.00
Get Access for USD 1000.00
GET ACCESS